At $1400 US you get a carbon-framed bike, decently outfitted with Tiagra.

Posted by Rogue Scholar at 5:44 PM No comments:

Cool ride! The On One Space Chicken Posted by Rogue Scholar at 2:57 PM No comments:

Cannondale Topstone: Could this be the one?

In the search for a stock bike that can handle light single-track, fire trails, gravel and more, this new arrival from Cannondale might punch the ticket:

You have to like that this aluminum frame is built by Cannondale, which made its name in aluminum.  And that the carbon fork has flat mount disc brakes, a thru axle, and a tapered steerer.

Comes with 700x 40 WTB Nanos, dropper post ready, and has thru-axles and 142mm spacing in the rear.  So they're boasting of clearance and off-road abilities.  Can't see any suggestion, though, that this bike would take 650b wheels.

Posted by Rogue Scholar at 12:57 PM No comments: 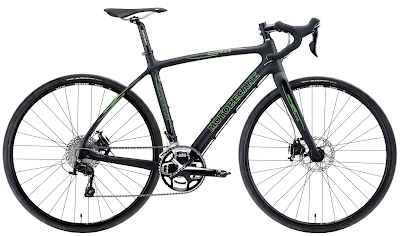 Hard to argue with this bike.  From BikesDirect.com you get this full carbon from, kitted with Shimano 105 shifters and derailleurs, with WTB tubeless-ready wheels, disc brakes and a decent crank.  Tire clearance is claimed at 45c.  At $1300US that's a pretty screaming deal.  It's called the Motobecane Sprint CF.  One can only hope the frame is worthy. 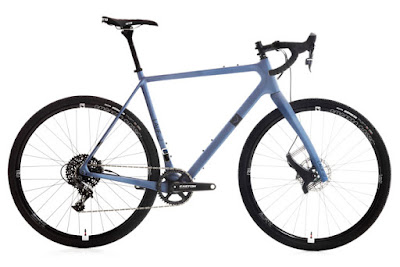 The addition of Lauf's new carbon adventure bike, the True Grit, is marvelous.  The Lauf fork is included, of course, but one also has the advantage of a bike that is purpose-built for the fork.  Other than the ridiculous bottle opener, this bike is solidly designed throughout.  Lauf claims the bike takes 700 x 45 tires with room for mud.  The gearing isn't low enough (a 42 single up front with an 11-42 cassette in the back), but that can be remedied.  Needs top bar brake levers, but that too is an easy fix. Kitted with American Classic AM28 tubeless-ready wheels and Maxxis Ramblers (40c), there's no need to upgrade on that front.  The lowest-end bike is on "sale" for $3290US.

Of course, the other option is to buy another bike and install a Lauf fork.  But, at $790US for the fork, not counting installation, it's not cheap.   Then again, it's not hard to find a carbon adventure bike for $1000 less than the True Grit.  With a bit of sale hunting, surely a carbon bike can be had for as low as $1500 CAD, with the possibility of adding that great-sounding suspension fork.
Posted by Rogue Scholar at 7:19 AM No comments:

Merida Silex looks like the real deal for gravel, single-track, and more 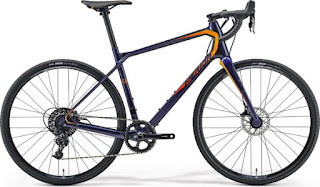 This is an exciting trend and its gathering momentum faster than you can bomb down a steep forest path: bike makers are getting serious about multi-purpose bikes.  This Merida Silex will come in alloy and carbon frames and will take 29er or 27.5 wheels.  If I'm not mistaken, the tire clearance is bigger than any other bike its class.  So you can run true 650b mtb tires on this for a real single-track experience, or ride with narrow gravel tires at 700c.  That's exactly the kind of flexibility I'd love.   Can't wait to find out more about pricing.
Posted by Rogue Scholar at 6:29 AM No comments: 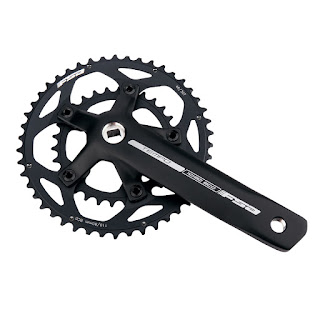 Gravel / Ultracross / Monster Cross cyclists take note: a better crankset will soon be headed our way.  Mark at Bikehugger sums up the issues nicely.  We need a crankset that can go low enough to climb steep dirt paths, not unlike a mountain bike.  And that's true, even without being loaded: for bikepackers the need is even more extreme.  To meet the need myself, I run a 40/28 Shimano SLX crank.  I do spin out sometimes going downhill on pavement.  It's probably a bit low, but what other options do I have but a mountain bike crank?

* SUGINO OX901D Compact Plus Crankset.  At a whopping $455 CAD (including BB), I won't be buying this crank anytime soon.
* the FSA TEMPO looks to be far more affordable.  Tempo is a budget line.  It's coming out for 9 speed systems,  which is a real drawback for a lot of us, and an indication that this is going to be a heavy and cheap crank for use on lower end gravel grinders.
* The IRD DEFIANT.  http://store.interlocracing.com/irdderodocr.html  Looks like they're asking $217 US for this retro looking 9/10 speed compatible crankset.

I won't buy any of these, b/c of the cost and drivetrain compatibility, but I'm excited to see that the manufacturers are finally catching on! 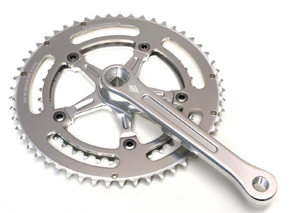 Posted by Rogue Scholar at 12:44 PM No comments:

When I saw this bike in Canadian Cycling it just leapt off the pages: a full carbon TCX priced at only $2350 CAD (about $2000 US) retail.  This TCX is designed for a more gravel-like performance, as opposed to cyclocross.  So the frame has more give and a bit less go.

According to the magazine article, this is the first cross bike that's ever received Giant's "SX" badge, by which they mean that it's super rugged.  Because of the abuse I rain down on my bikes, that's important to me.

This bike goes out the door with some lovely Maxxis Ramblers, size 700 x 40.  One presumes that the frame would allow even larger tires. The thru-axles on both wheels are nice, as is the 142mm rear-spacing, which keeps you in the game for 29er wheels.

I like the D-Fuse seatpost, which promises to deflect a lot of bumps.  And I like that the cockpit is shorter, to give a bit more control off-road.

My concern with this bike is the SRAM Apex 1 x 11 drivetrain.  The massive 11 x 42 range of the cassette should help get up some steep grades, but... probably not the worst of the dirt slopes I like to climb.  That 40 tooth ring up front probably just can't generate a low enough gear for me.

I'm also worried that this bike is built more for speed on dirt roads than for mobility on trails.  BikeRumor sums up the bike's roles: "With the racing geometry of the TCX cross family and the comfort of an AnyRoad, the SX provides a great mix of dirt, gravel, and paved capabilities."  It would be interesting to take this beauty on single-track, to see whether she eats it up, or gets eaten.   My hunch is that this bike will fail as a dirt climber and as a single-track descender.  But, maaaaaan, I'll bet this thing just flies down the dirt roads.  And, on sale?  For $1500 CAD?  That would be hard to pass up.
Posted by Rogue Scholar at 5:56 AM No comments: 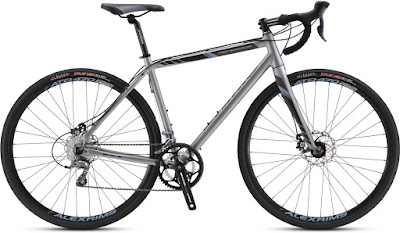 Have yet to see an adventure bike at this price: the JAMIS RENEGADE EXILE.  On sale at Jenson for $600, you get a pretty decent bike for the price, with room to grow.  True, you're kitted with Claris shifters and so forth, but who's to stop you from upgrading a bit here and there?  There's a lot to love--and keep--here, even as you evolve this bike.  The Alex rims are a great deal here: they're tubeless-compatible, for gosh' sake.  Not sure of their width. They are sold on *much* higher end bikes, like Jamis' Nova Pro and even their $2900 SuperNova Elite.  The Clement Xplr USH 700 x 35 tires are a really nice touch.  Those are going to be $75/pair anyway.    So for the wheels and tires alone, you're getting a deal. The cheap?  An aluminum fork and heavy parts all over.  That aluminum fork's not going to do you any favors on rugged roads, and it's perhaps the weakest spec on the bike.  Then again, you can buy a carbon fork upgrade, new or used... 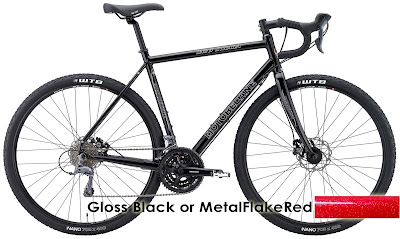 That weak point suggests that the Motobecane Omni Strada Sport is an even better deal.  It comes with a carbon fork at the price of $600 from BikesDirect. It too has tubeless compatible wheels, extra wide no less: WTB STP i23 TCS 29".  And it too runs on a Claris drivetrain.  One argument for or against the Motobecane is it's heavy crankset, with a mountain climbing 50x39x30 triple.  For me, that's a deal-maker, given the off-road climbs I like to do.  The tires are wire bead, but otherwise good: WTB Nanos at 700 x 40.  A great deal, except for one failure: it's nearly sold out in all but the smallest sizes.  The bike has all sorts of builds, such as the Ultegra-level Omni Strada Pro for $1200. Then again, it's nearly identical sister (albeit with a standard, not a compact frame) is in stock in all sizes for the same price.  The Motobecane Fantom Cross Trail more or less the same as the Omni Strada except that you get the narrower i19 rim and narrower 35c tires: it's angled a bit more towards cyclocross.  In yellow or black. 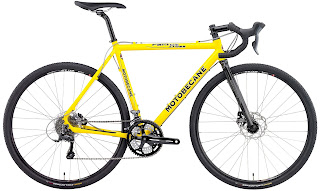 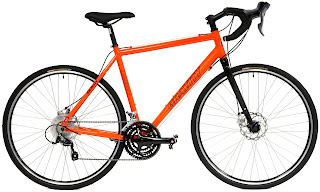 Save a hundred dollars at get a Motobecane Turino Comp, again with the carbon fork, but you lose everywhere else, from rims to tires to shifters.  $500US may seem quite the deal here, but you're saddled with such cheap parts all over, that it's not a real cost-saving move.  One can easily enough go up the food chain with the Turino, though, with various budget options, and then too at the 105 level ($1000) or Ultegra level ($1300). On the other hand, the $500 US Gravity Liberty CXD comes with carbon fork Claris/Sora drivetrain and Alex wheels.  3 x 8 triple crankset, with clearance for 43mm tires.  In orange, dark silver, or white.

Last but not least is the ugliest of the bunch, the overtly monster-cross Gravity Zila for $600. CrMo fork, WTB Speedisc 29er wheels and clearance for huge tires.  Ugly, but the frame is meant for some singletrack for sure.  The best features of this bike are its Sora shifters and Deore rear der.  Boasts clearance for 29 x 1.75 tires.  Ugly thing, isn't it? 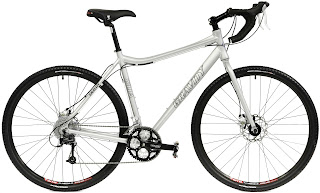 A rather stunning late entry here was just spied on eBay: alloy version of the Dimaondback Haanjo Comp.  HED wheelset, 105 specs, and more.  Seen on sale for $700 US ($925 CAD) on eBay!  Free pick-up in Cleveland, or $80 US to ship in US.  For a hundred bux more, that's a hell of a lot more bike that the Claris kitted options above.  BOUGHT IT!!  Final price: $625 US  (discounted due to different wheels, etc.).  I liked it fine, but it was no great bike.  Resold the bike in Toronto. 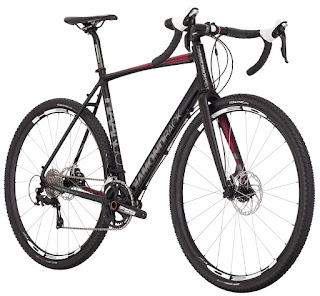 Posted by Rogue Scholar at 8:25 AM No comments: